This tutorial covers the fundamentals of Déjà Vu through a social news aggregation app SN, that is a simple clone of Hacker News. In SN, users can submit links, which can then be voted up by other members. Users can also comment on a post or comment and upvote comments. The code of the app can be found in samples/sn.

including and configuring concepts

The process of building a Déjà Vu app begins by navigating the catalog of concepts to find the concepts that provide the functionality you need for your app. The documentation accompanying a concept includes information about the configuration options (e.g., their effect on behavior) and the exported components. Concept components control a patch of the screen, are interactive, and can read and write back-end data. They also have input and output properties.

SN uses the Authentication concept to handle user authentication, Comment to comment on posts and reply to comments, and Scoring twice: for keeping track of upvotes on both posts and on comments separately. It also uses Property to save a post’s author, title, and link—the Property concept gives you a data-model-defining facility for simple CRUD behavior.

The concepts used by the app are specified in the app’s JSON config file (dvconfig.json). The code for SN’s config file is shown below:

In SN, we only have to configure Property. Property accepts a configuration variable (schema) that expects a JSON Schema to describe the objects it will be saving. We use schema to specify the type of properties we expect our objects (the posts) to have (an author, a title, and a url). The effect of this is that when we include a component from Property, such as create-object, the component will allow the user to input only those fields—author, title, and url. Moreover, since we specified that that the format of the url field is url (line 14) and that all fields (author, title, and url) are required (line 16), create-object will expect the user to provide a value for each one and check that the value given for the url field is a valid URL. If the user doesn’t provide a value for each field or the value for url is invalid, create-object will show an error message.

Each app component is written in a separate HTML file. Excerpts of the code for SN’s submit-post and show-post components, together with a screenshot of how they appear to users, are shown below: 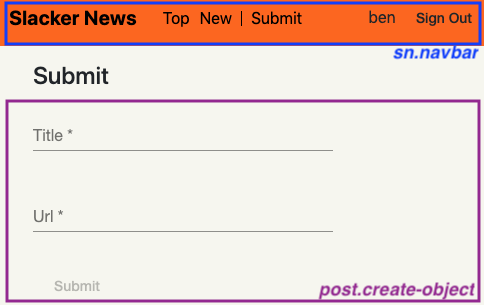 Components can be fired repeatedly, and the output variables hold the values from the last execution. This is how a selector widget such as a dropdown would typically be connected to another component: the dropdown sets an output property every time it is activated containing the choice the user made, which is then bound to the input variable of components that use that choice.

Some inputs are for customizing appearance and have no impact on the behavior of the component. For example, as a result of setting buttonLabel to "Submit" on line 7 of submit-post, create-object’s button will carry the label “Submit” instead of the default button label “Create Post”. The hidden parameter of show-object in show-post marks show-object as hidden. Hidden components are not shown to the user, but still run as if they were visible. Thus the object data itself is still loaded, emitted as an output, and used in several parts of the view—the title and the link are used and shown through lines 5-6, while the author is displayed on line 11.

App component inputs are preceded with \$. For example, show-post has an input named id that it uses in lines 2, 4, 9, and 12. Based on this input, how-object will show the post whose ID matches the given one; upvote will use the ID as the target of the score if one is created; show-target will show the score with the given ID; and clicking on the “comments” link will take the user to show-post-details with its input id set to the given ID.

To bind entities in different concepts we use a common identifier. In submit-post, for example, the same ID, generated by gen-id (line 4), is passed to create-object (line 5) and create-score (line 9). As a result, create-score will create a score with the same target ID as the object create-object will create. Similarly, in show-post, we feed the id input to show-object (line 2) and show-target (line 9). Each of these components loads and displays its own view of the post entity; the effect when put together is to display a SN post object.

Concept components have two actions: an evaluation action (eval) and an execution action (exec). The concept author determines what triggers the evaluation or execution of the component. Typically, the loading of the component itself triggers the evaluation of a component, and some user interaction (e.g., a button click) triggers its execution. What happens on eval or exec is also up to the author of the concept—the only restriction is that an eval action cannot produce a side effect. App components don’t have actions. This is because app components have no back-end functionality of their own—all data and behavior is pushed to concepts.

Eval/exec actions support the conventional user interaction pattern of web apps: data is loaded and displayed, and then the user executes commands to mutate the data. But perhaps concept components could offer arbitrary action types. This would require more work from the user (who would now have to specify what action types are to be coordinated), but could allow more complicated applications to be built, without requiring the modification or creation of a concept.

In SN’s submit-post, the tx is triggered by create-object (line 5) when the user clicks on the button. This is because the button in the create-object component of Property causes the component to execute on click, and since create-object is wrapped in a dv.tx, it will trigger the execution of all its sibling concept components. As a result, a new post and a new score will be created, bound by the shared id (the target id of the score is the post id).